Yep, I couldn’t leave you with only ONE link up post today! It is link UP week after all!

This next link party comes from A Bowl Full of Lemons. This is all about what’s been going on in or around your casa {i.e. what have you been working on?} New recipes? Redecorating? Being Crafty? Whatever project you’ve been working on, here is where you share it!

Did I mention I LOVE link ups? Because I do.

My recent project is one I’d been meaning to do for a while and finally got the time {and courage} to do it. We have a lovely little space under our steps that is constantly in disarray, so much so that we normally have it quarantined off so Keelin can’t get lost in the mess. At one point I kept my crafts under there but no matter how much I tried it would inevitably turn into a total mess. So when we moved the office downstairs into the living room I was able to take some of the clutter out and was determined to keep it clean and organized.

It stayed pretty clean for about a week but after the first time Z cleaned out the fish tank it pulled a Jekyll and Hyde transformation on us and returned to the unsatisfactory disaster zone. SO, when Keelin started to get more active and in need of a little space for her toys {not in the middle of the living room floor} I thought it would make the perfect little playnook for her. And Lord knows if it’s somewhere Keelin is going to be spending a lot of time I’m going to keep it free of dangerous clutter. So one day when Z was at work and The Bean was napping, I busted out the trash bags, vacuum, Swiffer duster, and got down to business. I’ve got to tell you, I gave myself more than one pat on the back for this epic success.

Here is the before, and I have to tell you it pains me looking at it again, to think that I let it sit like that for so long. BAD housewife {smacks back of hand}. 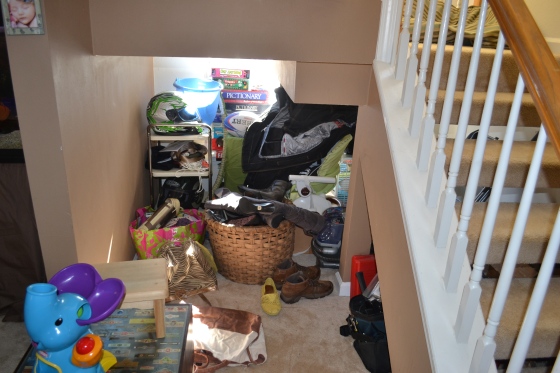 There was still enough down there that we use on a regular basis {regular enough to not want to go to the attic each time we need it} and decided I would re-organize it all {again} and section off the space directly under the first set of steps. That way we could still utilize it as storage but wouldn’t have overflow into Keelin’s play nook.

Yes, that is a Rock Band drum set. And Yes, I do rock that Rock Band drum set.
So once I got everything cleaned, organized and sectioned off, I began the REAL fun of filling the nook with as much cozy, comfy, and fun stuff as it could stand. And this is the HAPPILY Cleaner After:

Look at that and tell me you don’t want to spend the whole day snuggled up with that sweet elephant. Yeah, I know, it’s awesome. I’m really proud. And I’m even more proud that I’ve been able to keep it clean for over a month. Yes, it gets messy with her toys… but that’s what it’s for. She loves going into her little nook, looking through the window, snuggling with Phanny {the name I’ve given the elephant}, and playing with all of her toys. So even at the end of the day when some of her junk has trickled into the middle of the living room, I have a nice open area to put it all back in! And for those of you who are mommies worrying about that corner poking out toward the top right of the picture, she’s not nearly tall enough to hit it. And I’m pretty sure Z and I will successfully dull it with our own heads by the time she’s in danger of hurting herself.

The only problem is… now I want my own playnook.

Be sure you check out all the other great projects at A Bowl Full of Lemons and let me know if you joined in!