Hello 3rd trimester, I didn’t expect to see you so soon! 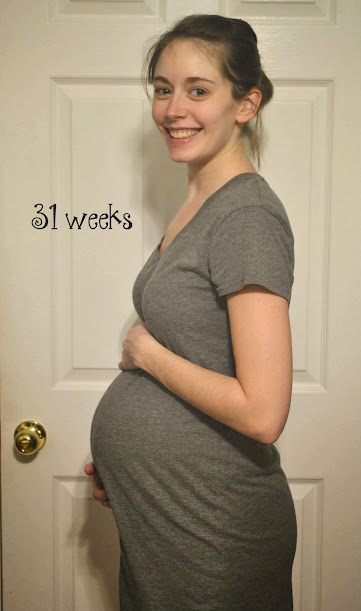 No seriously, this pregnancy is flying by WAY TOO FAST! I’m so excited to meet this little one but I feel like we just announced it to the world! It’s been a very eventful month and baby boy is growing strong and riding low! He’s giving me LOTS of crazy movements these days which leads me to believe he’s going to be one energetic little boy! These aren’t little pokes and jabs but back flips and full stretches. Fairly soon after my last update another exciting milestone started happening: braxton hicks contractions! Gotta love these practice runs for the BIG DAY. They seem to be stronger this time but I just credit that to my body being more used to the sensation since it’s done it before. I’ve been using each one as a chance to practice my labor relaxation techniques: focusing my attention on relaxing every part of my body sans the contraction itself and really letting my body do what it’s designed to do.

I’m definitely more tired these days and  have been dealing with dry eyes from time to time. I probably look like I’m mad but I’m just squinting through the dryness! I also blame the weather on that last part… nuts. One day it’s 70 degrees and the next they are talking about another POLAR VORTEX hitting us. Anyone else ready for spring and summer weather?

I’m still sleeping about the same; up at least once to use the bathroom and lots of adjusting throughout the night but overall finding it easy to drift back to sleep. It has become more of a process actually getting OUT of the bed since lifting my big ol’ belly requires a sideways push up. What little abs I have in there are no match for the weight of baby boy!

It’s also getting harder to hold K for long lengths of time… which makes it SUPER convenient that she’s been more whiney and clingy lately. It’s as if she knows she needs to get her 1-on-1 time in now so she’s always asking to be held, especially when I’m making dinner.  It’s not that she’s too heavy but just heavy enough {and tall enough} to be sitting uncomfortably on her brother.

As far as cravings go, I blame Valentine’s Day for my obsession with conversation hearts. Not the yucky chalky ones that taste like Comet but the good “Sweethearts” kind that actually have flavors. Shame on Kroger for offering 3 boxes for $1. It’s been my guilty pleasure! That and I could probably eat tacos for every meal. It’s not a mexican food craving, just tacos. Good thing the hubs likes them too because they’ve graced our dinner table a number of times in the last month!

One thing I’ve actually been struggling with this month has been successfully managing stress. I lost my grandmother at the end of January and had a really hard time dealing with everything surrounding her death. Not just dealing with the grief, which was quite painful, but the stress of traveling for the funeral {sadly without Z}, family dynamics, patience in parenting, etc. I broke down in tears a few times like when I was looking up airfare and the very unfriendly United Airlines woman told me it would be $841 for a bereavement plane ticket from Atlanta to Norfolk with a 5 hour layover in DC and K would have to have her own ticket {also at $841} because she was 1 month past the 24 month limit. Yea. Never flying United. Delta offered $480 round trip bereavement tickets {and had excellent, sympathetic customer service} but I still would have had to get K her own seat. Needless to say we did not fly. Being that I tend to be a crier even when I’m not pregnant, I was surprised that with the exception of a few more ugly cries, mostly I was just mad. My stress morphed with my hormones and turned into pure frustration and anger. I try to be as relaxed, happy, and calm as possible when I’m pregnant but I just could’t manage it. Thankfully when I was back home and into the normal routine with Z things got better. He really is my rock and I’m so thankful to have him.

That’s about all the pregnancy updates for month 7. I just can’t believe I’m already in the home stretch! Every time someone asks me when I’m due their reaction is always “WOW THAT’S SO SOON!” As I look at my to do list I’m realizing that more and more. Lots to get done but I’ve also gotten a lot accomplished, INCLUDING making some great headway on the nursery transition {pictures to come} and pulling all of K’s  baby things to a more easily accessible section of the our lame excuse for an attic {overexerted myself a bit with that one}. I’ll keep all the updates coming!