I shared a photo back in December called Transformation Initiation with a photo of our guest bedroom as it’s been for the last few years. We’ve added some new bedding and rearranged a bit but the color and basic layout has been the same from the time we moved in.

Now that we’re going to be using it as a guest room AND nursery for baby boy I’ve been happily checking things off my to do list {thank you nesting!!}. The painting was a lot of fun but the most difficult part has been taking on some major finagling to make all the furniture work. I love rearranging but being in my 7th month of pregnancy I didn’t want to spend all day pushing and shoving larger pieces like the dresser and bed around the room by myself; something I would have loved doing in any other circumstance. So I sought out the help of home improvement gurus John and Sherry Petersik at Young House Love. They were very helpful and pointed me toward Floorplanner.com. Holy moly I love this site!  You can create multiple floorplans with a few clicks and see what set up you like best BEFORE all the pushing and shoving begins! BINGO!

I’m working with a crib, side table, queen bed, glider and rocking ottoman. There is currently a small dresser in the room that I plan on moving INTO the closet to use as a changing table/set of drawers. That means the sliding doors on the closet will be removed so having anything near that back corner won’t be as cluttered as it might seem. As you’ll see in the three designs, there’s not a whole lot of space to work with and the bed takes up the majority of the room which makes things difficult. Pair that with the placement of the closet {sliding doors in the bottom right corner} and large back wall window and I struggled to make everything fit. But I really love the three designs I came up with and think any of them would work!

Here were my top three options: 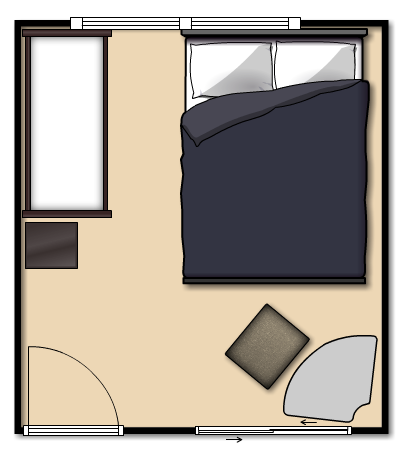 I like the parallel layout of the crib and bed in this first option, and appreciate that the bed isn’t facing the door, leaving a lot of walking room as you first enter. But the amount of space between the end of the bed and the glider isn’t the most ideal. I’m foreseeing that the filing cabinet we currently have tucked back in the closet will remain there and act as a shelf of some sort {covered with a fun fabric of course} so I can use it for easy-to-reach items while in the glider but it’s kind of behind everything which may prove difficult. 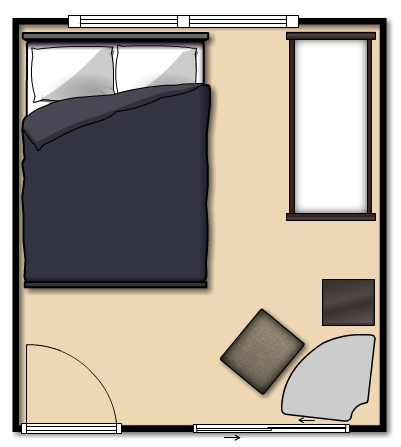 Another parallel set up which, again, I love. It will be very convenient if I want to grab baby boy during the night and lay back down to nurse or snuggle. Only this time there’s significantly more room between the ‘sitting corner’ and other furniture. I also like that the extra space allows me to have the side table next to the glider which will definitely come in handy if I need to reach something while rocking the baby. Another perk to this layout is that the crib is on the outside wall instead of up against K’s room. So if baby boy is pitching a fit it {hopefully} won’t be as much of a disturbance to her. 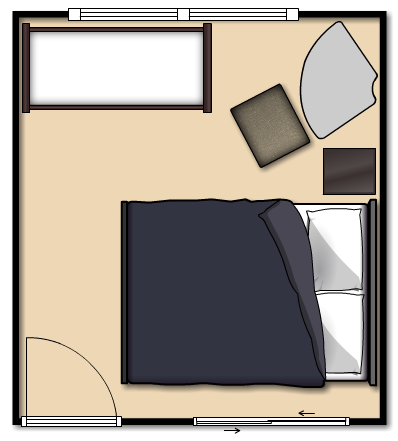 Design 3 is probably my least favorite. The bed is basically in the same place it is now just closer to the front wall. There’s plenty of space there to walk but I don’t like that the largest piece of furniture in the room is pressed so closely to the wall. Plus, despite the fact that we are keeping it a partial guest room, having the bed in the same place it’s always been makes it feel less like a ‘new room’ which is kind of the goal. I like that the glider is back in the corner, and has access to the side table again, but I’m not a fan of the crib being right up against the window. Even though we’re not sure if we’ll be in this house next winter, I don’t like the idea of any kind of window-draft being that close to baby boy. Kind of a dud design, but worth sharing.

So what do you think?  Does one stand out above the others??

While I’m still deciding on the winning layout, here’s a run down of what is being done in the room and what’s already been completed!

1. paint the room – using a light grey {almost white} while leaving a single navy accent wall. Lightening the color helped open up the room and make it seem larger! – DONE

2. remove the large dresser – DONE {thanks mom and dad!}

3. empty out closet – possibly use the filing cabinet as additional shelving. It’s a little too big to put up in our tiny attic and is more accessible for filing bills and what not. 50% DONE

4. move small dresser inside closet- opening up more space and creating a changing table in the closet.

5. bring K’s glider/ottoman in from her room to give her more space for some of the larger Christmas toys she got and provide a rocker for baby boy. I LOVED rocking K when she was fussy or before bed. Definitely want to so that with baby brother as well.

Lots more to do but I’m eager to get it all done!