Time for another pumpkin update… and I’m only a week behind in getting it posted this time… getting better!
Here’s my growing bump! 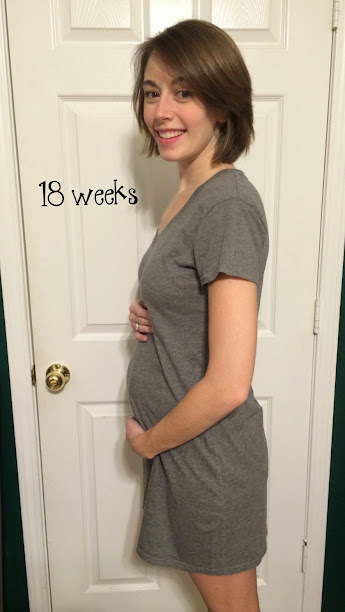 This past month has been a doozy and it all started with a little sniffle from the Bean.
K isn’t one to get sick. Seriously she’s never had a ‘real’ cold {knock on wood} so I wasn’t too worried when she caught a slight cough and runny nose. My brother’s family had passed around a cold the week prior but since K didn’t show any signs of slowing down we carried on like normal. That was until it hit me. Like a freight train!
You should know that colds tend to really take their time with me, and even more so when I’m preggers since I can’t take anything substantial to help kick it early. I was basically quarantined to the bedroom for about 4 days and shuffled around the house for another 3. Things started to clear up with rest, tea, soup, and Emergen-C, but then I started to feel weird pressure in my ears. Off to the doctor I went and he told me I had a sinus infection. Awesome. So I reluctantly went on a mild antibiotic that finally kicked everything. It took a good 2 1/2 weeks before I felt normal again. Oddly enough I had a sinus infection at about the same point when I was pregnant with K, even though it was the dead of summer… what’s that about?

So while being sick for far too long was a major bummer I did get something good out of it. My first flutters! I was feeling really uncomfortable about having to be on an antibiotic during the pregnancy and was saying a quiet little prayer asking that God protect pumpkin during my sickness. Right at that moment I felt a flutter. It reminded me of feeling K move for the first time, and I was even in a similar position – sitting, but leaning over slightly, like you do at a desk or table. It was such a perfectly timed flutter {Thank you Lord} and allowed me to relax a little knowing all was well.

In more happy news, once I got past all the crud from my cold I realized I was past all the nasty pregnancy symptoms too! Nausea has subsided {with the exception of easily sparked car sickness} and my appetite has returned with a vengeance! The headaches have spread out more as well and I’ve tried to be very conscious of drinking plenty of water during the day to keep them away. I also decided to switch prenatal vitamins, which I think has helped a lot. I highly recommend the VitaFusion gummy vitamins. They are great and very tasty! I’m also sleeping a little bit better, despite very vivid dreams and my growing bump which seems to be low low low once again! My boppy pillow is yet again my best friend!

I realize that without an easy-to-fill-out survey I may lose track of stats but at least the more notable ones will get mentioned. Oddly enough I feel like I’m being more of a hypochondriac this time around as well. You’d think that with your first and all the unknowns you’d constantly be worrying, but I felt so laid back my entire pregnancy with K. Now I have something to compare this one too and I start to think, “was it like this last time?”, “that’s different, does it mean something’s wrong?”, “what if x,y,z happens?”, etc. My imagination starts to run away with itself and I have to remember that things are going to be different and that’s ok. I was already thrown for a loop with all the first trimester crud, so I’m learning to expect the unexpected and accept that fact that my abnormally perfect pregnancy with K will most likely not be duplicated. Perhaps it was like a warm up round and God was just preparing me for the possibility of chaos in future pregnancies!

I have a lot more to share about the week surrounding Thanksgiving but since it is TECHNICALLY a part of next month {in the pregnancy} I will hold off… and spare you from having to read any more in one sitting.  Just know that it was quite eventful and we are still recovering.

And before you get another monthly update, I’ll probably be sharing pumpkin’s gender in the next week or so. My big ultrasound is in a week and we are having a small gender reveal party at the house the following Saturday. Which means I will have an envelope containing the mystery of what’s between my kid’s legs for 4 1/2 days and won’t be able to look at it {we’re going to find out when the rest of our friends and family do}. Pray for my self-restraint… and even more for Z’s.
So, time to take your bets… boy or girl? Click the link and cast your vote!

What do YOU think Pumpkin will be?