It’s time for a baby update!
First things first… my 13 week {3 month-ish} bump photo… the first peek of a tiny bump! I’m 15 weeks at the moment so, yes, a little late getting this posted but maybe I’ll get on a better schedule soon. 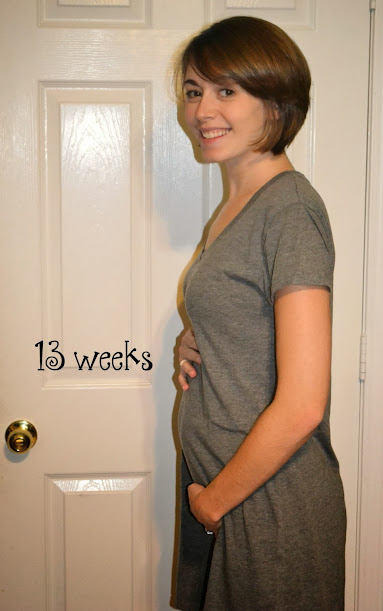 Holy moly this pregnancy is quite the roller coaster!
What started off the same as with K is now COMPLETELY different. That’s why I’m saying it’s a rambunxious little trouble-making boy. Just putting that out there. My massage therapist said so too… said she should feel the energy of a little boy that will be a non-stop mover. We’ll find out in early December… any bets from the bloggosphere?

As you can see in this month’s photo, there’s actually a bump there. Proof I’m not lying about being pregnant… either that or I just ate all of K’s Halloween candy {guilty}. Either way I can definitely see a little mound peeking out and although I feel more chubby than pregnant at the moment, it’s a pleasant arrival! This also means I’m in that awkward stage between regular clothes and maternity clothes. There’s one good pair of regular jeans that I can still squeeze into although I’ve been relying on a hair-tie around the button/button hole to give baby a little more breathing room. I’ve brought out my big bin of maternity wear and organized it in order of when I’ll need them {season-wise} but I haven’t worn any of them yet. Holding out for my own self esteem. 🙂

Most of my morning and all-day sickness has subsided as long as I can get food in my stomach right after I wake up and keep from getting hungry during the day. I still get smacked in the face with it randomly every now and then and reunite with the toilet bowl. The problem with keeping my stomach full is that I still don’t have much of an appetite or taste for anything… scratch that… anything healthy. Cheese is still my best friend {yay calcium} but all the good proteins I should be eating just aren’t that appealing. I have been feeling hungry which is a happy new development, unfortunately by the time I notice the hunger it’s partnered with a pukey feeling. Just the other day I actually had a craving for a Chick-fil-A sandwich, which I was really excited about, but by the time I got it I was so hungry I didn’t feel well while eating it. I blame the extra pickles I THOUGHT I wanted.

The biggest development this month has been headaches. Oh boy, do I loathe headaches. They seem to come in cycles and aren’t really stemmed by anything but they will last a good 2-3 days straight. Not fun, especially with sewing and computer work to be done and a ball-of-energy toddler running around wanting to narrate everything she’s doing in her almost-real-talk babble.  I’ve been asking for help on Facebook for natural remedies and have tried just about all of them. Ice on the back of the neck while feet are in hot water, icepack on the eyes, peppermint oil, frankincense oil, you name it. I finally got the suggestion of Be Koool Migraine Gel Sheets and I figured it was worth a shot. LOVE LOVE LOVE them! I could still feel a little of the ache, but those sheets are so cooling and lovely and life-saving! I went to sleep with it on my head and woke up feeling great! They will be my go-to remedy when the next one hits.  If you want headache relief and don’t want to take medication, give these a try!

In other new, and to no surprise to anyone who has ever been pregnant, I am an emotional mess. Just about anything can stir up tears, even Publix commercials, and I can become a raging biotch in the blink of an eye. This is why God decided a man and woman should be married before getting pregnant… no one but someone who has committed their lives to yours could possibly put up with such a mess! 😛

Alright, there’s the latest news in preggy-ville. More updates and first trimester stories to come! I have another baby appointment this week but won’t be seeing my normal midwife so it shouldn’t be too eventful. I’ll be sure next month’s bump photo and update are ON TIME!

OH, and a dear friend of mine is sweetly calling baby #2 pumpkin because of our pregnancy reveal. I haven’t heard any other nickname suggestions so it’s the current front runner! Any other nickname ideas?