When we got pregnant with Keelin it was a bit of an overwhelming time {we were thrilled but I was not expecting to get pregnant as fast as we did} so I didn’t have any big reveal planned for Zechariah. It was more like:

Z: You’re probably just freaking out over nothing. Go buy a test, take it, and call me when you know. It will probably be negative and you can relax at knowing… one way or another.

me: It says I’m pregnant. But I’m still freaking out.

Z: Well, that’s wonderful. I love you. Don’t freak out.

me: ok. When are you coming home.

So when we decided we wanted to add another little pumpkin to our patch I immediately started brainstorming ideas on how to share the news with him when that plus sign first showed up!

Since I track my fertility I was pretty positive I was pregnant but was trying not to get too worked up. Z even asked me one day, “If we weren’t trying to get pregnant, at what point would you be freaking out?”. I said “probably next week” with a nonchalant look on my face and every intention of buying a pregnancy test that day at the grocery store.  And buy one I did.

I woke up the next morning, snuck into the guest bathroom while Z was still sleeping, and took the test. Those beautiful pink lines brought instant tears to my eyes and I had a little silent dance party by myself before finding my composure and ‘inner peace’. It would take me all day to get my surprise ready so I had to make sure I was cool enough to make Z believe nothing was out of the ordinary. I’m such a good actress you guys. He didn’t suspect a thing! Our morning went as usual and he left for work. I got myself ready and finalized my plans! Oh and I told Keelin she was going to be a big sister. She looked at me, smiled, and then ran across the room to tackle one of the dogs. She’ll get it one day.

I knew I wanted to do something with the pregnancy test but still wasn’t set on anything so I decided to load Keelin into the car and head to my favorite inspiration station, JoAnn fabric.

They were having a sale on framed canvas so I grabbed a few in a variety of sizes and stared at them for a while, trying to decide WHAT to do with them. That’s when I remembered I had been meaning to add some wall art to the downstairs bathroom. I found some simple white frames at Target for like $5.00 and stumbled across some adorable antique nic-naks during our last trip to Michigan that I wanted to display somewhere. Jackpot!  I grabbed some colored paper for the back of the frame and headed home to get started.

First I took a hint from the amazing Petersik’s of Young House Love and used paper cut outs of my frames to make the perfect layout on the wall. 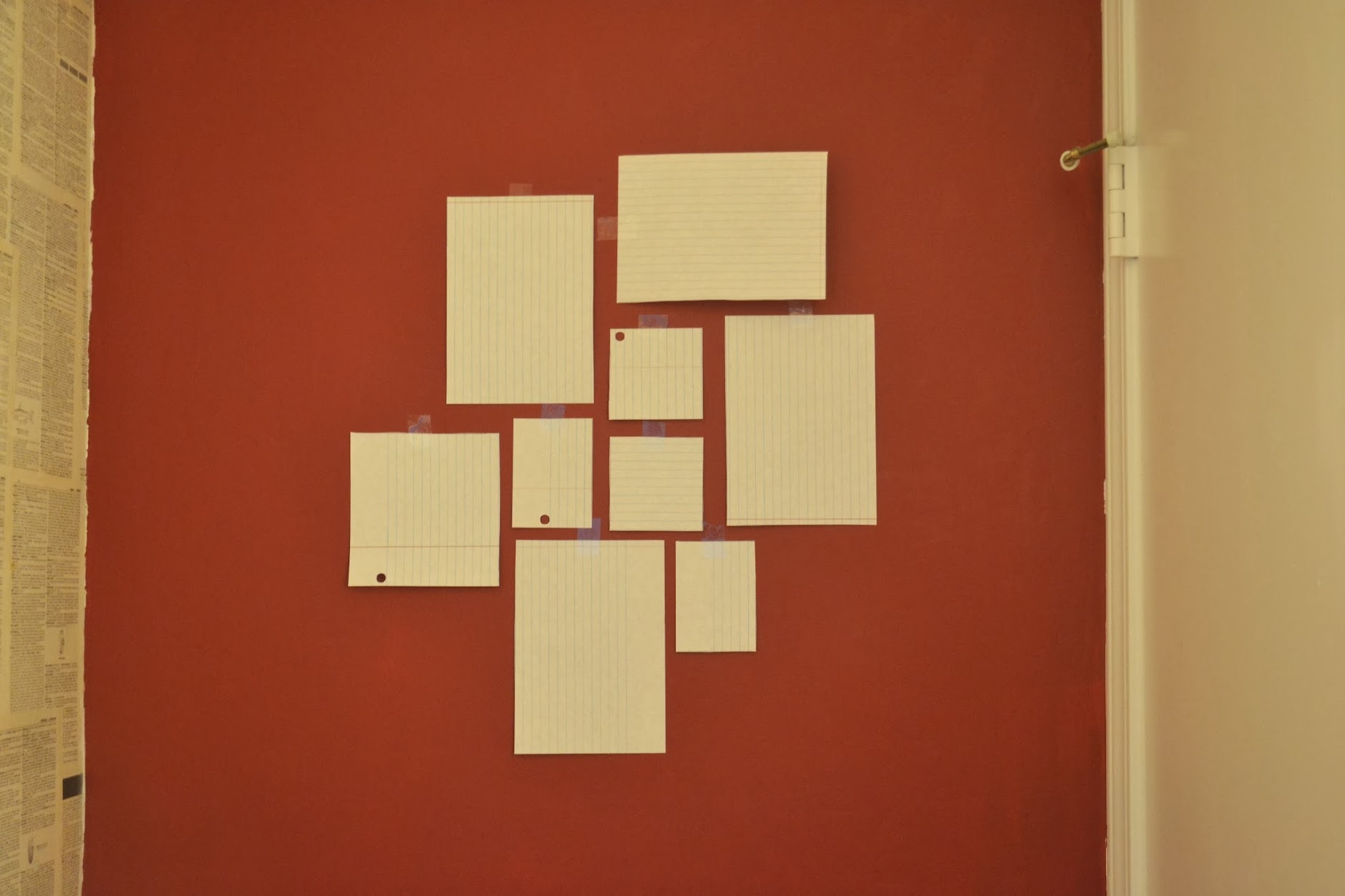 The larger pieces would be replaced with my Target frames and antique finds in a shadow-box form while the smaller pieces would be replaced by the discounted canvas frames.  But what does this have to do with telling Z I’m pregnant? I’m glad you asked.  My antique finds consisted of three vintage skeleton keys and one giant safety-pin. Four pieces for four frames. Perfect for the end result but in order to make it a special reveal, I replaced one of the keys with the pregnancy test I’d taken earlier that morning. 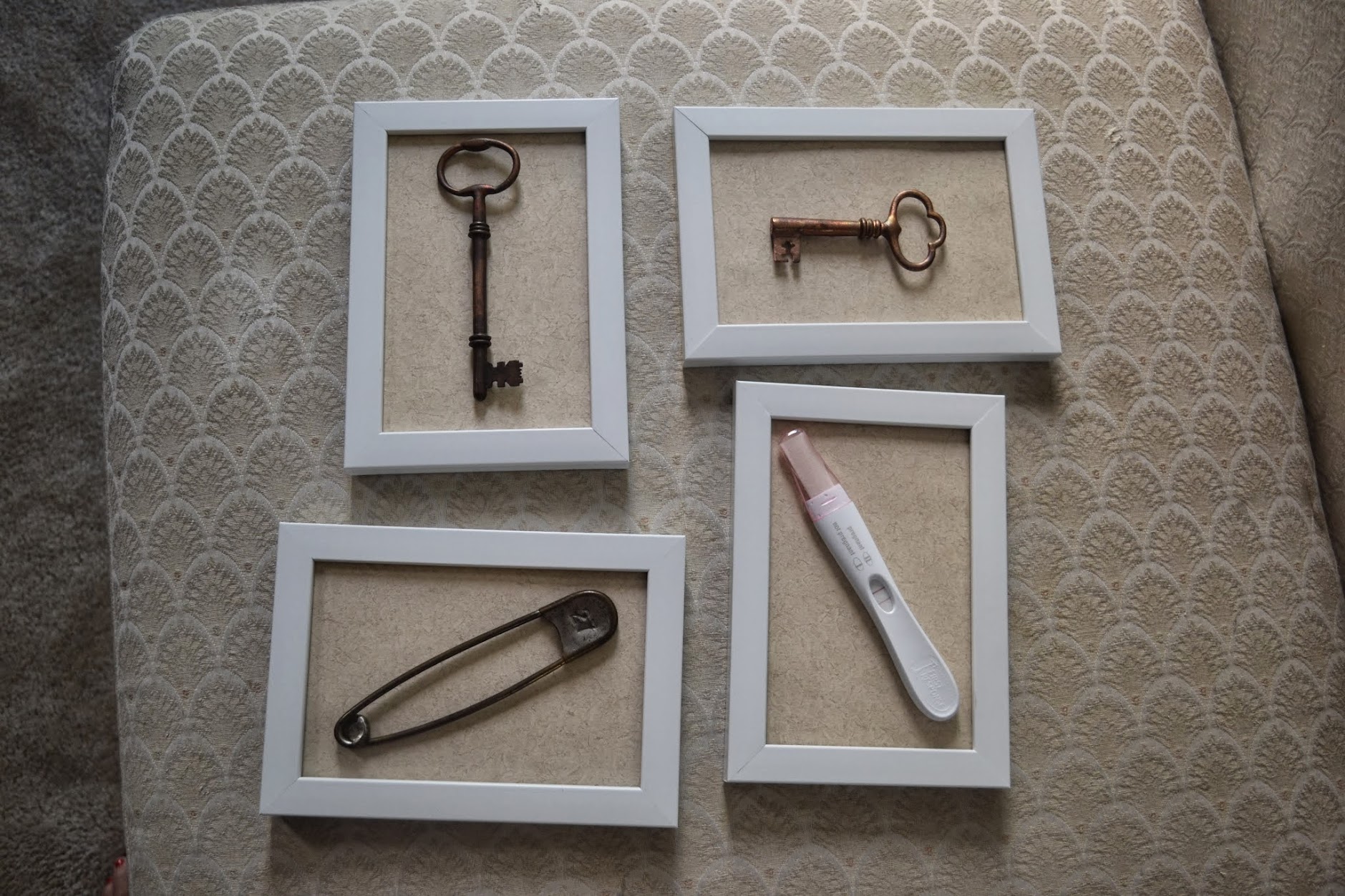 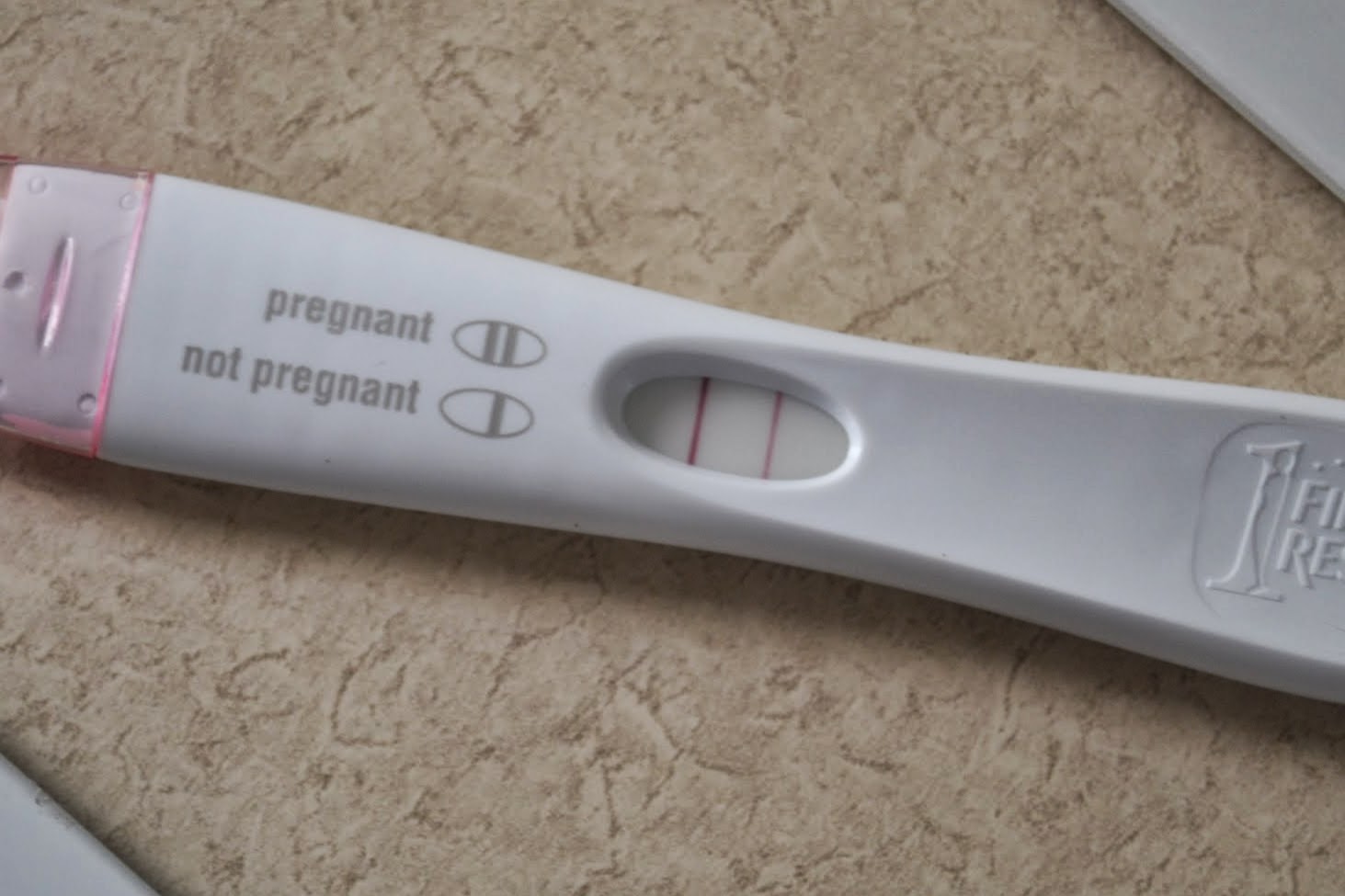 The next step was hammering in my nails {hammer them straight through the paper into the wall, so you make sure they will match with frame hooks, then pull the paper over the secured nails and off the wall} and hanging the ‘real’ art.

It’s my first attempt at cluster frames but I think it turned out pretty well for the space I was working with. Please ignore the horrible paint trim, it was a tricky job with lots of uneven edges. 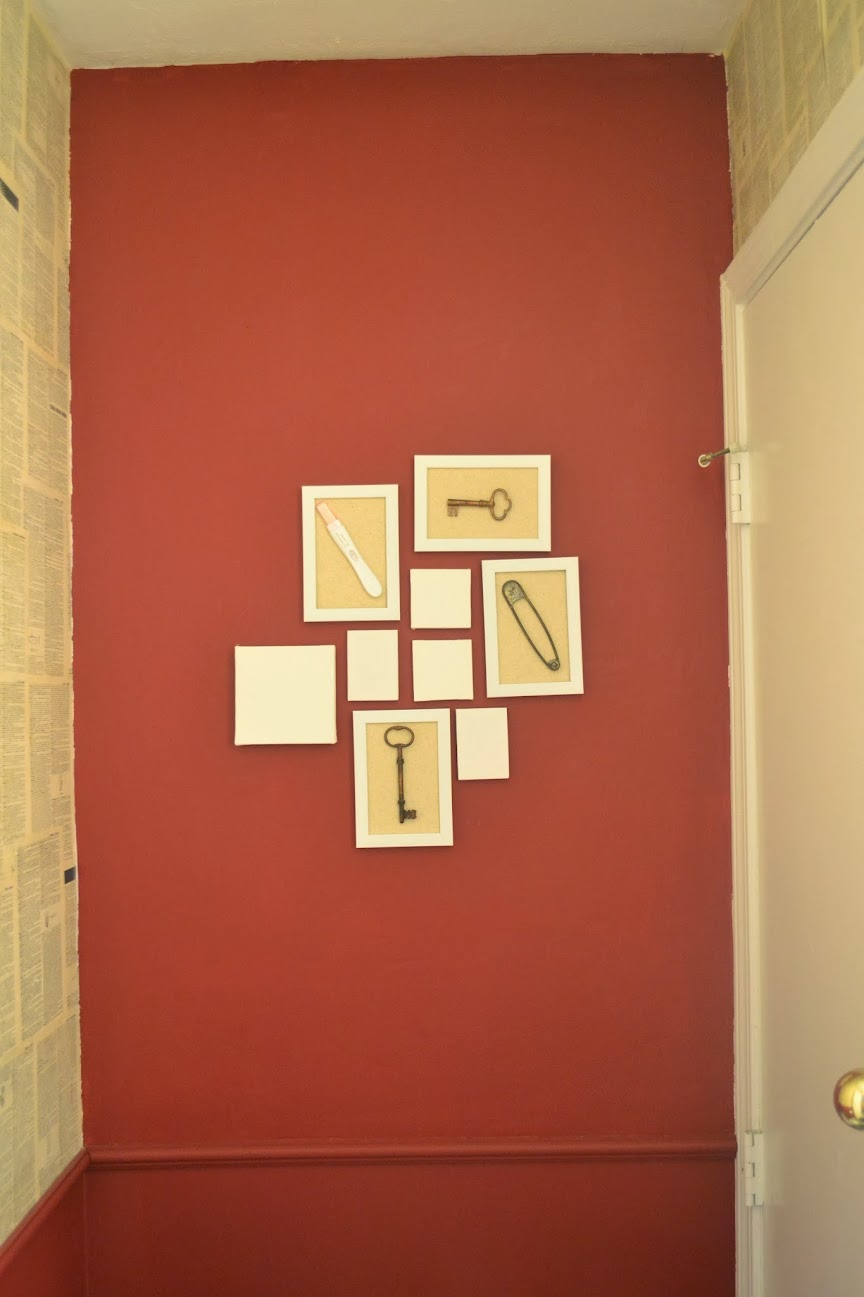 Cute right? At first glance it just looks like frames until you notice the test. Just what I wanted.

So… for the actual reveal story…

That night I was going with my sister-in-law to a local consignment sale and wanted to make sure that I was home to see Z find the frames so I told him I needed him to be home before I left so I didn’t have to take Keelin with me to the sale. About 20 minutes before I had to leave he arrived home and we chatted for a few minutes about his day at work and my plans for the evening. I was fidgeting with my camera, pretending to look through some new product photos I’d taken for theKeenBean, setting up the video option so I could record his reaction. Trying not to be a jittery, nervous mess I told him that I’d finally hung the frames in the bathroom and wanted to know what he thought. I pressed record and followed him into the room.

He walked in, confused at first because he had forgotten I had wanted to add anything to the walls in the first place, and smiled at the newly hung frames.  The next conversation followed:

Z: Oh, those look great! I love how you used the keys. Very Cool. Wait a minute…

Z: Well that one’s different.  [turns and looks at me] Is that what I think it is?

me: Well what do you think?

Hugs and smiles and congratulations followed and it was the exact reaction I was hoping for. I do have video documentation, which is very sweet and most likely shaky because I was so nervous, but I’ve decided to keep it private. Hopefully I told the story well enough not to need it! I was shopping with my sister-in-law within the next 10 minutes and doing everything I could to keep my excitement contained. I even resisted buying some $1.00 newborn onesies, which all consignment shoppers know takes extreme restraint.

All in all I felt quite accomplished at pulling off my special reveal and thought the frames turned out great. I actually really loved having my own personal secret for the day too. It made things that much more fun and special.

The pregnancy test didn’t stay up on the wall, but it wasn’t immediately replaced by the intended antique key either… I had to milk one more announcement out of my brilliant frame idea, didn’t I? That’s a story for another day!

Did you have a really unique pregnancy reveal for your husband?