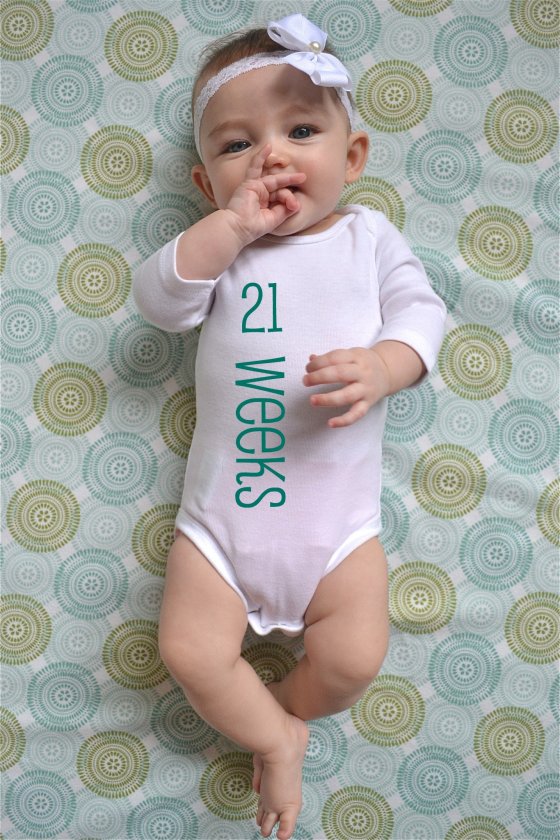 I absolutely love this fabric and REALLY want to make something out of it. Perhaps a cute little pair of summer shorts that will make all other babies turn green with envy at the beauty and brilliance of my child’s stylish behind. I’ve been feeling the ITCH to start using Keelin’s old onesie fabrics for clothes but I can’t decide if I’m going to need each full yard for her big year project… which has yet to be decided. Perhaps if I keep at least 1/2 of each yard for the 1-year project I’ll still be able to come up with some super cute stuff using the other 1/2. Also I need to learn how to sew. I mean really sew. More than just a straight line to make curtain valances. I need to REALLY sew. You know those moms who can just look at a piece of fabric and magically turn it into an outfit. Yeah, I want to be one of those moms.

Anyway…moving along to Keelin’s stats from this past week. I’ve never really thought of them as “stats” but when I really think about it, that’s what this weekly post is all about. During my pregnancy it was what cravings I was having each week and now it’s what new breakthroughs or habits Keelin has. I’m so glad I’m documenting this week by week so I can look back and really remember her first year. I just hope I can keep it up for future beans. {Not that I’m expecting to add another bean to the mix any time soon} So, like I said, on to the stats!

The biggest event to report is that Keelin rolled over from her back to her tummy! She’s been a pro at flipping herself from her tummy to her back… and will normally do it over and over again during my attempt at tummy time, little stinker… but she was having a tough time getting her arm out from under her enough to roll the other way. Well on Monday I was helping Z with something while Keelin was playing on her activity mat. I had placed her on her back, walked to the other side of the room, and when I turned back around she was propped up on her elbows looking up at me! It was one of those moments where I had to pause and ask myself if I’d actually put her on her tummy in the first place. After realizing that she had indeed flipped over, I freaked out!

It was a huge event and she kept doing it all day long. I never caught it on video… she’s a sneaky one… but I’m determined to and will be sure to share! Surely you remember my squealing excitement when I caught her first tummy to back roll on video!

Keelin loves her bumbo and jumper. It’s only been within the last few weeks that she’s been able to sit in them for any lengthy period of time. She looks like a little buddha in her bumbo and will just sit and observe everything. The only time she really gets excited in it is when one of the pups comes up to her at which point she tucks her shoulders up, brings her hands to her mouth, smiles, and giggles.  Her little legs are getting so strong and she’s been pushing up as if she’s going to stand on her own! I swear this girl just may walk before she crawls. I can already hold on to her hands to balance her while she puts all her weight on her legs. I’m SO impressed! Her stronger legs have made the jumper much more fun! She’ll push off of her tiny feet and wave her arms in excitement… which often leads to her jostling her tummy and spitting up all over herself… but it’s worth it! 🙂 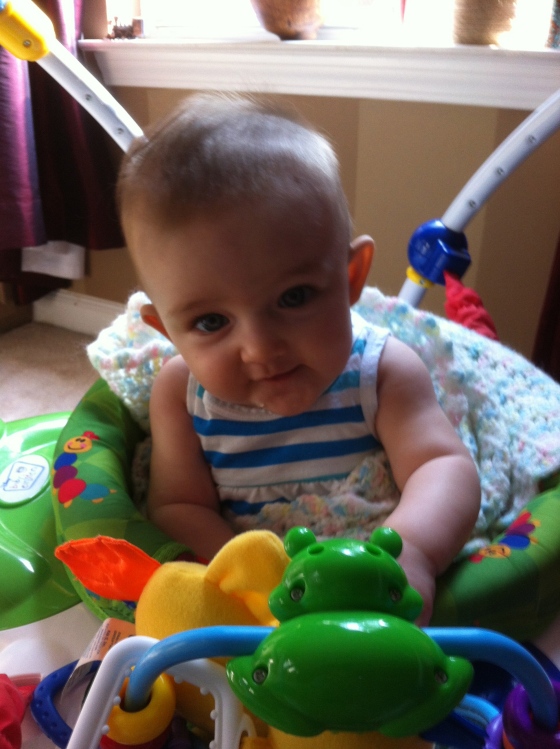 A few days ago she got into her biggest giggle fit yet. She was laying on her activity mat and Z was down on the floor with her. When the pups came up to Z he started goofing off with them… flipping them around and blowing in their faces which sends them into a crazy frenzy! They started scooting all around the floor and running in circles and Keelin thought it was hysterical. She was watching and laughing every time they would take off into a spin. I got it on video but it’s on the hubs’ phone so I’ll have to steal it to show you!

A random and silly update is that Keelin has become infatuated with the tags on her toys. Not so much her toys… but their tags. It’s quirky and weird and totally adorable! She’ll shuffle her stuffed animals around in her hands for a few minutes, feeling all the textures and triggering all the jingle, rattle, and crackling noises but it’s not until she gets a hold of the tag that she’s REALLY intrigued. I’m going to have to make some kind of TAG HEAVY ribbon toy for her!

I’ve been asking my mommy-friends on Facebook for info on their favorite carriers. I have a Chicco front carrier that is actually pretty comfortable but it is such a hassle getting her IN and OUT of it, I really feel like I need 10 hands to pull it off.  That means I’m 8 short and even when the hubs is there to help me we look like total morons. SO I was poking around for another carrier when I was reminded of the BRILLIANCE and versatility of the Moby Wrap! I suppose I had it in my head that the moby was meant for teeny tiny’s but after giving it a try with Keelin I fell back in love with it! It was so easy to get her into it… and with only TWO HANDS! It is also beyond comfortable and she seemed to like it too…

Please ignore my face and focus on her YODA ears which I absolutely adore! 🙂 Needless to say, I won’t be purchasing any new slings or carriers as long as my moby holds out!

Keelin is such a happy baby and every week when I sit down to write her update post I’m reminded of how lucky I am to have such a sweet, smiley, chatty bean!

That’s about it on the update front.