As you may have already noticed by my history of Hump Day Bump Day pictures, Keelin is quite the low rider.

I swear eventually my belly button is going to turn up to face me if she keeps it up… or down rather. On a side note… I also noticed that I have not one, but TWO little freckles/moles in my belly button. I always knew about one but now that things are stretching out I suppose the other is out of hiding. How strange is that? I wonder what it’s from. Now I’m really hoping it won’t pop because it’s weird enough having them in there, let alone out and proud. Bleh.

Back to Keelin’s low-riding skills… If you’ve never heard the old wives tale about how women carry when they are pregnant, just know that I’ve successfully drop kicked it into the LIE zone. People used to think {when mom and pop didn’t know what the sex of the baby was until DDay…} that if you were carrying high it meant you were having a girl and carrying low meant you were having a boy. 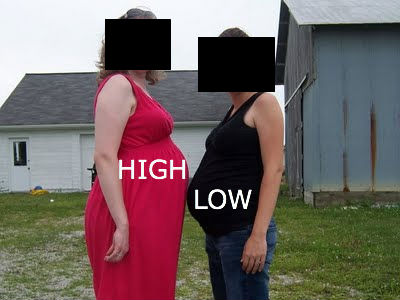 Perfect example! Don't be fooled by the fact the girl in pink is taller... look at how high her bump starts and how LOW the woman in black starts!

The TRUTH of the matter is {and this is a legitimate piece of research on the subject} if you are carrying high, there is a 50% chance it’s a girl and vice versa. cough cough, DUH cough. There are only two options people… what other “chance” do you think you’d have?
Thankfully Z and I found out that Keelin is all girl, all the way, and I can appreciate my low rider for the sweet little lady she is!
Although my belly isn’t at a stage that I would call large {although definitely growing}, Keelin has successfully made it impossible for me to zip MOST of pre-preggo pants. That’s actually how I’ve been able to reassure myself that I am {and she is}, in fact, growing… since the scale hasn’t been much help as of late. For example: last week I could get at least 5 zipper teeth closed on my Lucky Brand boot cut jeans before coming to a halt, but this week I could only get 2.  Three points for Keelin! While I have no problem fitting into the majority of my pre-preggo tops, with the exception of a few that have become a LITTLE too short for my liking, I’ve learned that the pants just don’t lie.
So, while Keelin keeps up her low riding style… putting up a valiant fight to defeat all the zippers of the world…I keep my handy-dandy BellaBand working overtime and am holding out for the day when even it’s mighty powers are no match for THE BUMP. It’s not that I’m avoiding purchasing maternity jeans/pants… because I do have a few already including two of the most comfortable pairs of shorts known to man and one OH SO STYLISH pair of dress pants that make my toosh look like it starts ½ way up my back… I’m just avoiding going overboard on the maternity purchases while I can still make my normal clothes work. The more cash I can keep in the bank the better! I’ve heard stories of preggos that go WAY overboard on maternity shopping sprees and end up having huge boxes of left over clothes that may or may not ever get used again. Granted, I’m definitely hoping that Keelin is the first of many little Pierces so I’m sure I’d be able to reuse them all down the road, but I’m trying to be as frugal as possible until I absolutely have to. Yes, I’m a little uptight when it comes to money.

Enough of my brain dump!

What are some of your favorite or most heard of old wives tales about pregnancy?